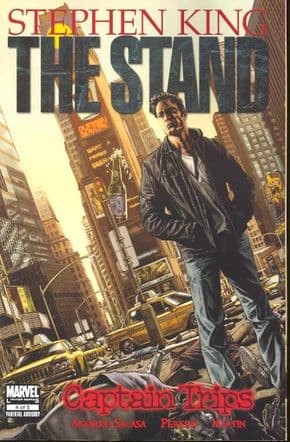 The Stand Captain Trips #4 (2008) Marvel comic book. "Written by ROBERTO AGUIRRE-SACASA, Penciled by MIKE PERKINS, Cover by LEE BERMEJO. The first volume of Marvel's adaptation of the Stephen King horror epic draws to its conclusion! For Larry Underwood, Nick Andros, and Frannie Goldsmith, the deadly superflu has immediate--and devastating--consequences, striking down people near and dear to their hearts. Meanwhile, outlaw Lloyd Henreid gets some grim news from his attorney and General Starkey is relieved of his duties--in the most definitive way possible. And somewhere far away, but getting closer, the Walkin' Dude is making his presence known... "