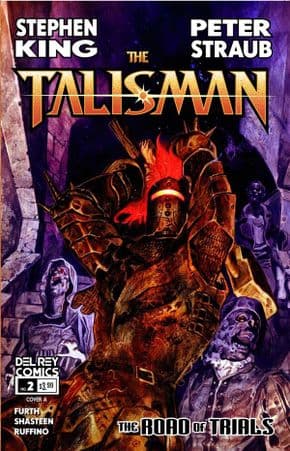 The Talisman: The Road Of Trials #2 comic book by Stephen King from Del Ray Comics. (W) Stephen King, Peter Straub, Robin Furth (A) Tony Shasteen. The Talisman is an object of immense cosmic significance-yet even more important to young Jack Sawyer, it also holds the key to saving his mother's life. But even as Travellin Jack makes his first foray into the Territories in search of his prize, danger lurks in the form of the sinister Osmond and the cruel, calculating Morgan of Orris. Cover by Massimo Carnavale.