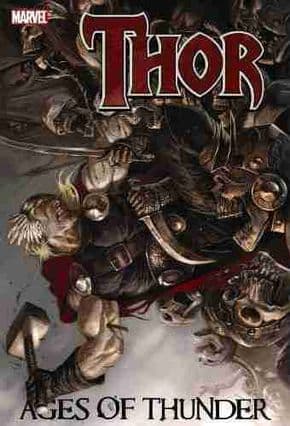 As the Mighty Thor reclaims his rightful spot in the Marvel Pantheon, we join Matt Fraction and Patrick Zircher as they examine the triumphs and tragedies that have befallen the God of Thunder across the eons. As all the things he holds dearest are threatened by unimaginable forces of evil, Thor must rise up, again and again, to hold the line against terror and chaos as only the God of Thunder can! Plus, for countless millennia, over and again has the mighty, thunderous, impetuous, petulant god Thor raged and rebelled against the leadership of his father and lord, the all-powerful Odin. The capricious tantrums of a selfish titan, spoiled by his own power. But... ODIN HAS HAD ENOUGH! And so as the cycle is repeated in all ages, Thor must ultimately face the fullest wrath of the enraged All-Father! Collects Thor: Ages of Thunder One-Shot, Thor: Reign of Blood One-Shot, and Thor: Man of War One-Shot.