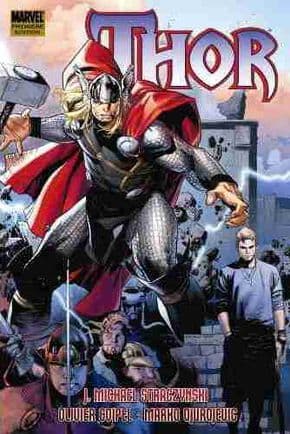 In the wake of Ragnarok, and after awakening from the sleep of the gods, Thor has set about restoring Asgard to its former grandeur — making it more majestic, more magnificent than ever. He has revived countless fellow Norse gods, from the brave Balder to the voluminous Volstagg to the treacherous Loki. But what of Odin, the All-Father? Where is the lion of Norse legend, the son of Bor, the one who took a godhood of rambunctious rabble-rousers and made of them a pantheon without peer? Why is he yet to be awakened? The answer is a secret known only by the God of Thunder — a secret buried deep inside a soul filled with the kind of fear and humiliation only a son can feel in the immense shadow of his father. Though, as Loki’s master plan will soon attest, Thor is not the only one with a secret to share. Collecting THOR #7-12; #600.