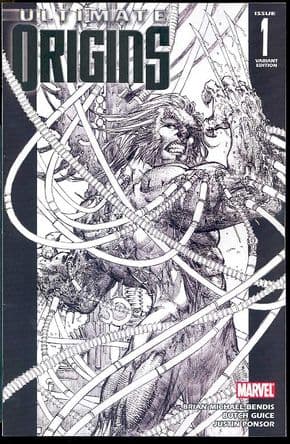 Ultimate Origins #1 Michael Turner 1:75 Retail Incentive Sketch Variant comic book from Marvel Comics. A super Near Mint copy of this very hard to find variant edition that was only available to retailers who ordered 75 copies of the standard issue to get just one of these! In the new series, writer Brian Michael Bendis and artist Butch Guice unite to lift the veil from some of the apparent conspiracies woven into the tapestry of the Ultimate Universe. Starting in the World War II era, the vast history of the Ultimate Universe will be explored to reveal more about the Super Soldier and Weapon X programs and the link between such heroes as Captain America, Nick Fury and Wolverine.