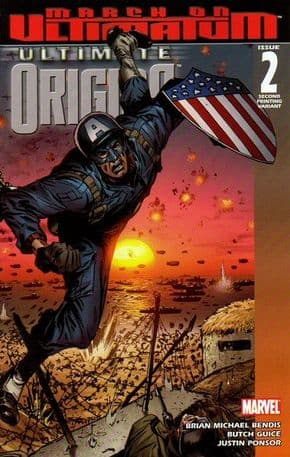 Ultimate Origins #2 2nd Second Print Guice Variant (2008) Marvel comic book. Revealed: The secret history of the Ultimate Universe! For the first time in 70 years, a strange object within Project Pegasus has awoken – as bit by fascinating bit, the long buried mysteries are being exposed! Journey back to World War II, and discover that the deadliest threat to young Steve Rogers was not the Nazis, but an ancient threat from worlds beyond! The dream team of Brian Michael Bendis (SECRET INVASION) and Butch Guice (CAPTAIN AMERICA,) continue the Ultimate series of the year that is a must-read lead-in to ULTIMATUM!