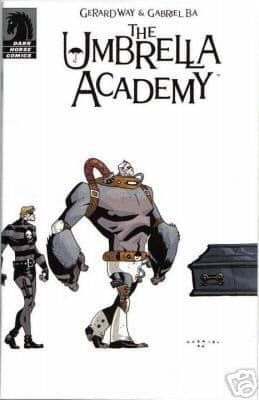 Dark Horse Comics Umbrella Academy #1 Special Variant comic book that was limited to only 1,000 copies, which were given directly to Retailers. Once, the Umbrella Academy was unstoppable. Under the tutelage of their guardian and mentor, Dr. Reginald Hargreeves, its members spent their childhoods fighting evil and honing their extraordinary gifts. Until something went terribly wrong. Now, nine years later, the estranged members of the Umbrella Academy are reunited by the death of the only parent they've ever known and the rise of a new and terrible threat. Will they be able to overcome their history for long enough to save the world-one more time? Conceived and written by Gerard Way (of My Chemical Romance), Umbrella Academy features interior art by Eisner Award-nominated artist Gabriel Ba (De:Tales), colors by Eisner Award-winning colorist Dave Stewart, and covers by multiple-Eisner Award-winning painter James Jean (Fables).