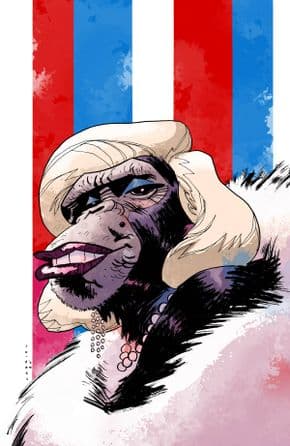 Umbrella Academy Dallas #2 (2008) Dark Horse comic book. Gerard Way (W), Gabriel Bá (A/Cover), and Dave Stewart (C). While Spaceboy watches reality TV and Number Five lies low in a seedy motel, a threat against the Umbrella Academy begins to rouse the team, who've been rather uninspired since the catastrophic events from 2007's best-selling Apocalypse Suite. Only one member of the team understands the danger that lies ahead-the massacre in Costello's Diner has raised some suspicions of what's happened, and what's to come. At the heart of this, the Umbrella Academy feels the loss of Pogo, the chimp that had held them together since childhood, and resort to remedies that won't help, and, sadly, won't cure boredom. 2008 Eisner Award winner-Best Limited Series and Best Cover Artist!