War Machine comics, tieing into the Dark Reign comics series, published by Marvel Comics in 2008. From the pages of IRON MAN and AVENGERS: THE INITIATIVE, War Machine blasts into his own ongoing solo series! Across the globe, from the killing fields of Santo Marco to the blasted deserts of occupied Aqiria, butchers and tyrants are committing the most horrific atrocities imaginable. The outside world won't raise a finger to stop them, but now Jim Rhodes is on the job. And forget a finger – he’s raising a couple of ginormous shoulder mounted rocket cannons! From WORLD WAR HULK scribe Greg Pak and DEATHLOK artist Leonardo Manco comes the most shocking incarnation of War Machine you've ever seen – along with a surprisingly familiar supporting cast and one of the biggest villains in the Marvel Universe! 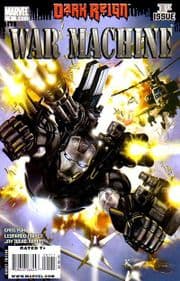 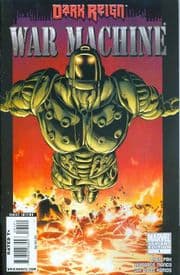 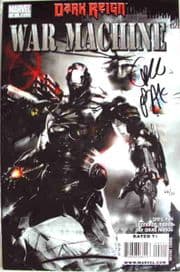