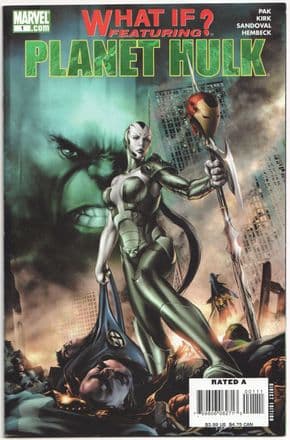 This key issue features the first appearance of Skaar, son of Hulk!

Bagged and boarded from new. The scans are of the actual item in Near Mint condition. There is a small wrinkle off the spine near the letter "P" in "Planet" which is the grain of the paper stock, not a spine stress.

The scans are of the actual item in Near Mint condition. Bagged and boarded.

Cover by CARLO PAGULAYAN, Written by Greg Pak. Last year, a group of Marvel heroes decided the Hulk was too dangerous for Earth, tricked him into a shuttle, and shot him into space. After the Hulk rose from slave to gladiator to conquering emperor on the savage planet of Sakaar, the shuttle exploded - destroying the Hulk's people and his pregnant queen. And the entire Marvel Universe knows what happened next as the Hulk returned to wreak his terrible vengeance in the pages of "World War Hulk." But what if the Hulk had landed on the peaceful planet the Marvel heroes originally intended? What if Banner had landed on Sakaar instead of the Hulk? And what if the Hulk's warrior bride Caiera the Oldstrong had come to Earth seeking vengeance instead of her husband? Get ready for three shocking tales of what could have been from the writer of the "Planet Hulk" and "World War Hulk" epics.