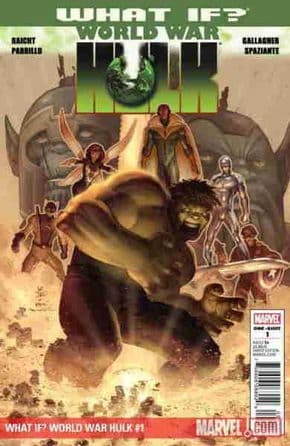 What If? World War Hulk #1 comic book from Marvel Comics.

Erupting out of what could have been in the pages of World War Hulk, a double trouble of stories! Writer Mike Raicht (EXILES ANNUAL) and artist Lucio Parrillo (Red Sonja) illustrate the Hulk's war against the Illuminati and the resulting disaster that leaves Earth without its mightiest heroes. Who could possibly benefit from such a catastrophe? We'll give you a hint, it's not the Hulk... but they're green, too. WHAT IF THE HEROES LOST WORLD WAR HULK? In the second feature, a vengeful Hulk and his Warbound began routing Earth’s super heroes, confident no one could stop him from dispensing his gladiatorial brand of justice. But in this alternate telling of the story, the recently returned God of Thunder hammers out a different conclusion in “WHAT IF THOR PARTICIPATED IN WORLD WAR HULK? by Michael Gallagher (GUARDIANS OF THE GALAXY) and SPAZ! (MUTIES). Plus a “SAY WHAT?” comedy strip by Mike Gallagher (Mad Magazine) and Dave Manak (Spy Vs. Spy). One-Shot