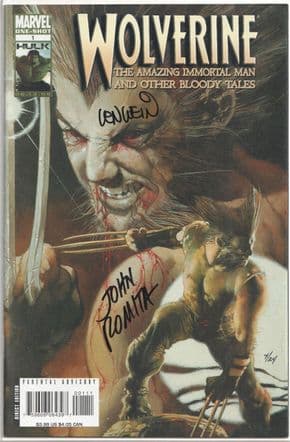 Wolverine The Amazing Immortal Man #1 Dynamic Forces Limited Edition Signed comic book from Marvel Comics, which is signed by two of the co-creators of Wolverine - the late Len Wein and John Romita Sr.!

Len Wein was the writer on Incredible Hulk #181, which featured the first appearance of Wolverine, and John Romita Sr. designed the costume and retractable claws!

It comes with the holofoil seal intact and complete with a low numbered Dynamic Forces Certificate Of Authenticity #4 of just 24 copies produced, confirming that the signatures are authentic!

The scans are of the actual item. Bagged and boarded in Near Mint condition.

Scans are of the actual item.