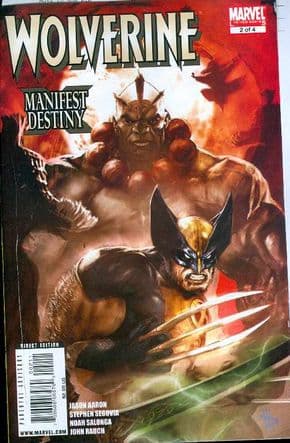 Wolverine Manifest Destiny #2 (2008) Marvel comic book. Written by JASON AARON, Penciled by STEPHEN SEGOVIA, Cover by DAVE WILKINS. Wolverine is back in Chinatown, settling old scores. First up, his vengeful ex-girlfriend. Only problem, she now commands an army of gun-toting thugs, along with four mystical Kung Fu warriors, who together put a beatdown on Wolvie the likes of which hasn't been seen in years. Now with Wolverine driven into hiding and the entire city out searching for him, who will dare come to his aid?