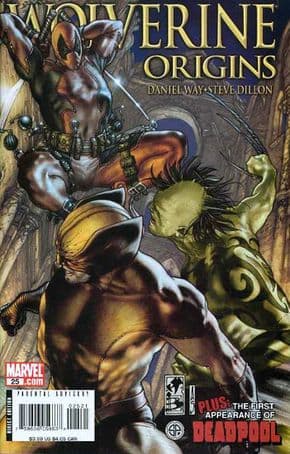 Wolverine Origins #25 Skrully Variant (2008) comic book from Marvel Comics. This retail incentive variant comic was only available to retailers who ordered sufficient copies of the standard issue. The cover is a pastiche of the Skrulls from the Secret invasion comics. Written by DANIEL WAY, Penciled by STEVE DILLON, Cover by SIMONE BIANCHI. "The Deep End," Part 5 (of 5). The trap has sprung. Wolverine is Deadpool's prisoner. But Deadpool isn't getting paid to deliver a prisoner-he's getting paid to take Logan out, once and for all. Is that even possible? Deadpool has found a way, but just as he's about to pull the trigger (so to speak)...the other trap springs! Be here for the completely twisted conclusion! Plus: Celebrate the 25th issue of WOLVERINE: ORIGINS with a special BONUS: the very first appearance of Deadpool, from NEW MUTANTS #98, plotted and penciled by ROB LIEFELD and scripted by FABIAN NICIEZA!