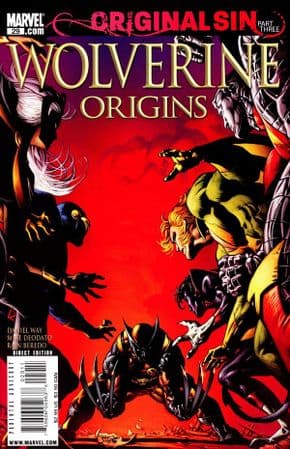 Wolverine Origins #29 (2008) Marvel comic book. Written by DANIEL WAY, Pencils by MIKE DEODATO, Cover by MIKE DEODATO & RICHARD ISANOVE. "ORIGINAL SIN" PART 3. Continued from X-MEN LEGACY 217! It's WOLVERINE versus the HELLFIRE CLUB as he seeks his missing son, DAKEN! The bodies will fly and the blood will run as PROFESSOR X learns the secret of Wolverine's early days with the original new X-MEN! Things were not as they seemed-but who was deceiving whom? And is there time to save Daken's soul?